3 million plastic water bottles have been saved from landfill through the introduction of free drinking water fountains at stations. 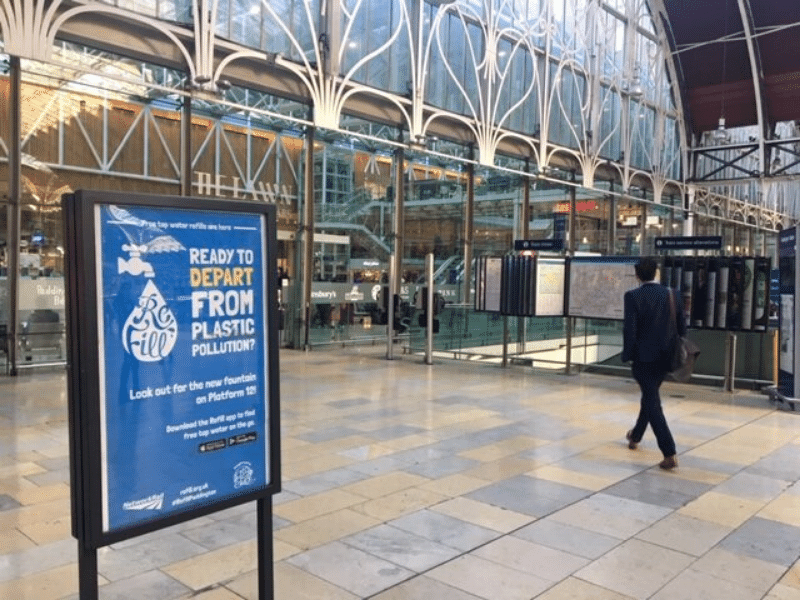 Water fountains are now located in every Network Rail station

Passengers have helped save the equivalent of 3 million plastic bottles* from landfill with the introduction of free drinking water fountains at Network Rail’s biggest and busiest stations.

Since launching in 2018, the water fountain initiative has proven increasingly popular with passengers. During last year’s National Refill Day, Network Rail celebrated saving the equivalent of one million plastic bottles and set a target of reaching two million by the end of 2020. Passengers have already surpassed that goal by one million by making the switch to reusable bottles.

This success coincides with the final major station, Leeds, installing their water fountain last month as part of their wider refurbishment works. Free water fountains can now be found at all 20 of Network Rail’s managed stations, including Waterloo, Birmingham New Street and King’s Cross.

Working with Network Rail supports City to Sea’s campaign to increase #PlasticFreeTravel, and is the start of working with all major train stations and operators to help passengers reduce their plastic waste when on the go. “It’s fantastic to have the support of Network Rail, and through our partnership with them, we are empowering passengers to avoid single-use plastic. We know that when people are on the go, this is the time they’re most likely to buy a plastic bottle of water. Research shows, 36% of people that regularly carry a reusable water bottle say they would buy a plastic bottle at a train station**. We are here to offer them an easy, cheap and good for the environment alternative. Now that’s something to raise a glass to”.

He continues “But it doesn’t stop here – our next big goal is to explore whether train operators could offer free drinking water on board trains too. Watch this space!” “Network Rail has a big role to play in tackling plastic pollution. We know that passengers share our passion for reducing single use plastics, so it’s important that we make it as easy as possible for them to refill throughout their journey. It’s great that we now have free water fountains in all of our managed stations, and even more so, that they’re making a real difference for passengers.”

“Network Rail and City to Sea’s campaign has been a massive success, ensuring passengers stay hydrated, save money and we all save the planet one water bottle at a time.

“People across the country start and finish their days on our railways and encouraging water refills both avoids waste and means that, as a nation, we won’t be running on empty.”

Find your station water fountains on the Refill app!

Download the Refill app to find water fountains on the go.