Refill Cardiff is one of our most active Refill Schemes in Wales. Find out how they started and what makes them so successful.

In Cardiff, the Water Research Institute based at Cardiff University didn’t just bring Refill to the University but to the whole city. Refill Cardiff is now an ‘umbrella’ scheme for the city with smaller schemes set up in the boroughs. It has been especially successful in engaging both the academic and local communities. They are now a key part of the new Refill Cardiff expansion project thanks to new funding from the Landfill Disposals Tax Communities Scheme.

WHO ARE REFILL CARDIFF?

The team leading Refill Cardiff are from the Early Career Group at the Water Research Institute. They are PhD students currently working on water-related research at Cardiff University. Via Refill they inform people about current research on plastics and promote the work done by researchers of the Institute on the relevant topics. Setting up effective social media accounts were key to this.

Refill Cardiff launched with a public event in November 2018. They worked with master’s students from the Journalism school to cover the event on the day and secured media coverage. High profile figures such as Welsh Government’s Deputy Environment Minister and Cardiff Council’s Cabinet Minister for Clean Streets attended, along with two professors from Cardiff who are experts in microplastic pollution and behaviour change and were invited to speak. Various Cardiff based environmental organisations were invited to have an information stand at the event which showed great collaboration. 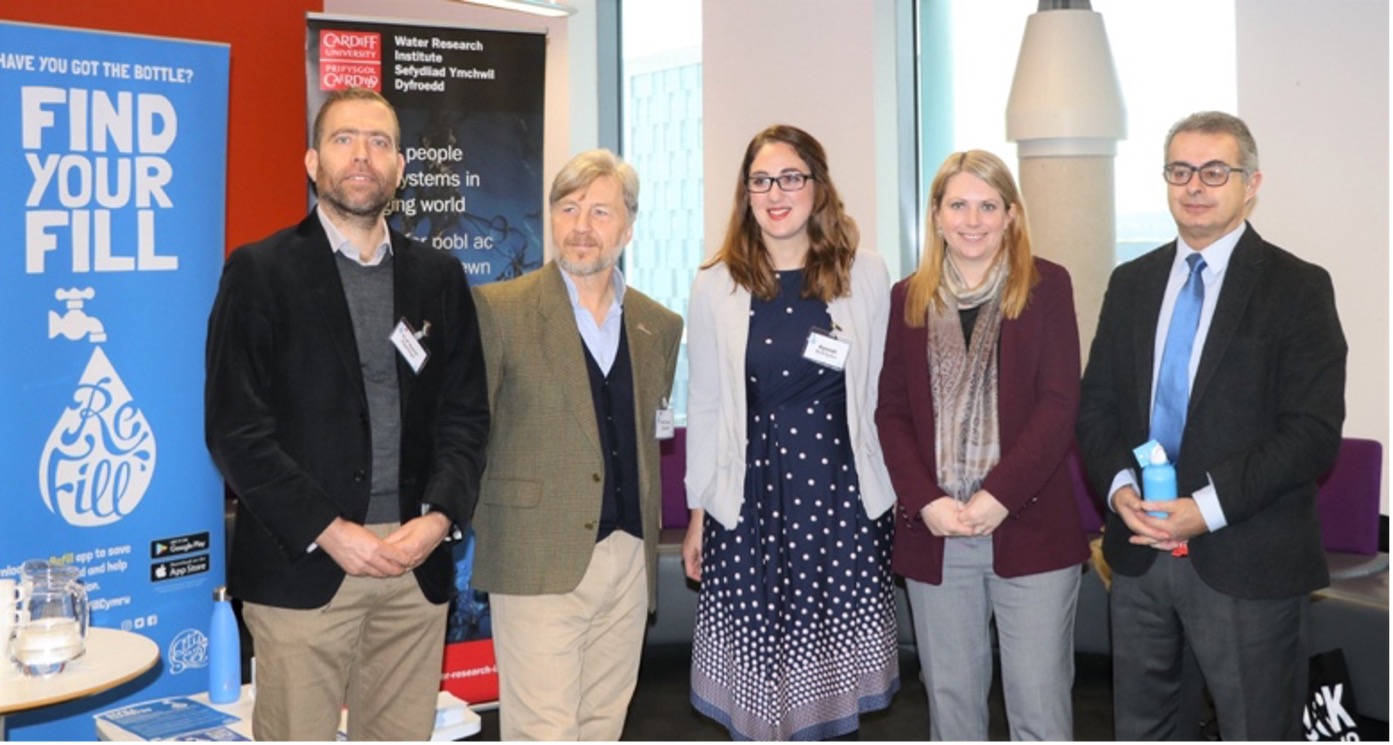 They organised a popular panel debate evening on ‘Plastic Pollution – Research To Everyday Life’, with a panel of expert speakers and starting with a short version of the film ‘A plastic Ocean’. Nibbles and drinks gave plenty of opportunity to network and build relationships.

From the very beginning, the team were very passionate about working in the community, especially with children and young people. They researched and got involved with local key events such as Techniquest- Under The Sea Evening, Cardiff University Science Week and Night at the Museum. By reaching a wider community audience they had the opportunity to speak to both children and adults in the local community.

Refill Cardiff worked with the organisers of Tafwyl Festival, a free Welsh cultural festival which takes place in the grounds of Cardiff Castle. Water standpipes were put in place to act as Refill Stations and the Refill Cardiff team had a stand in the Cardiff University area. More ambitious plans are now being made, with potential for Refill branding on the big screens, a water bar and branded water bottles.

They also worked closely with Run 4 Wales and for the first time ever, water stations were installed in the Runner’s Village at the Cardiff University Half Marathon 2019. Over 20,000 runners took part and along with their families, they were able to refill their water bottles for free at the end of the race. 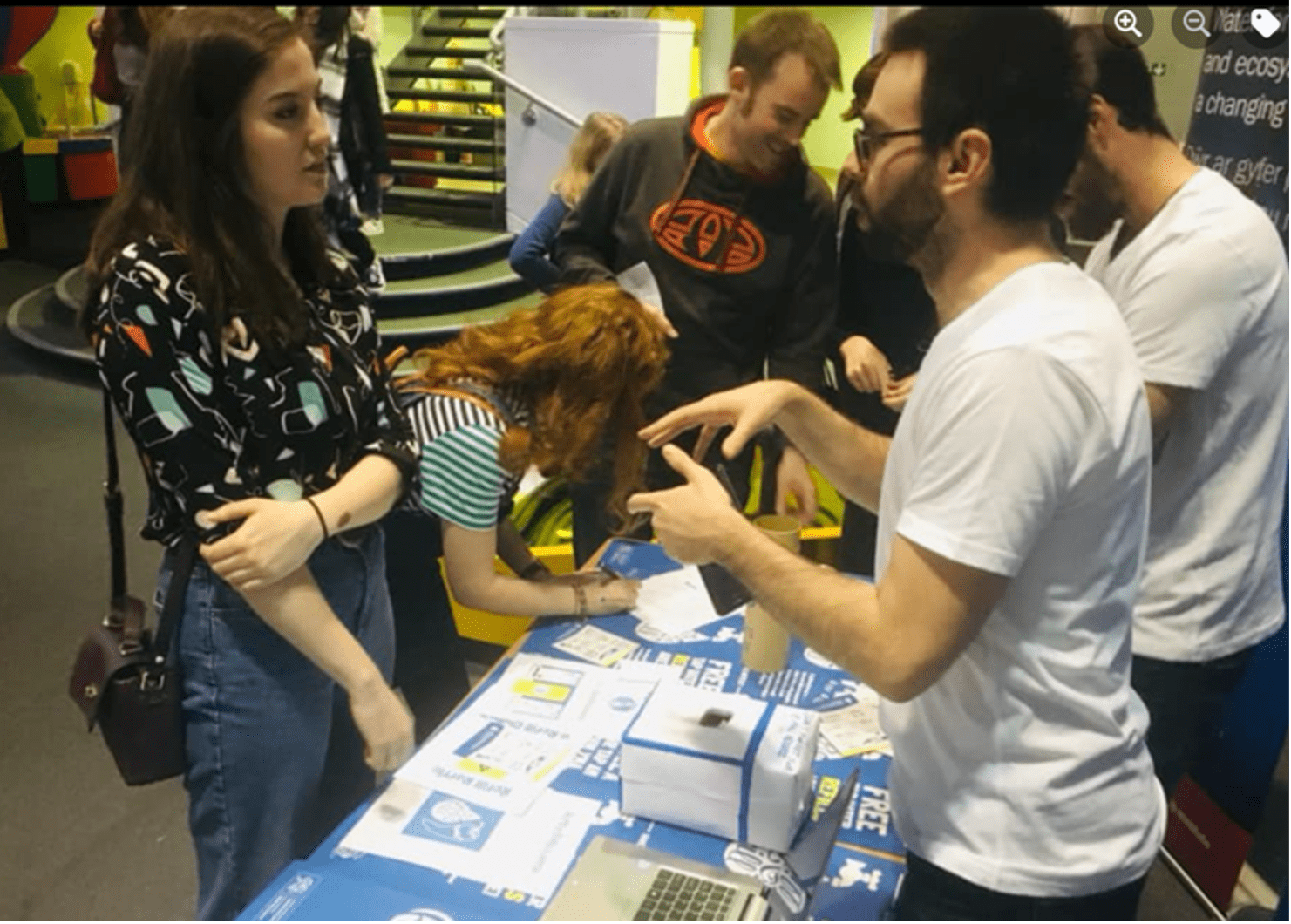 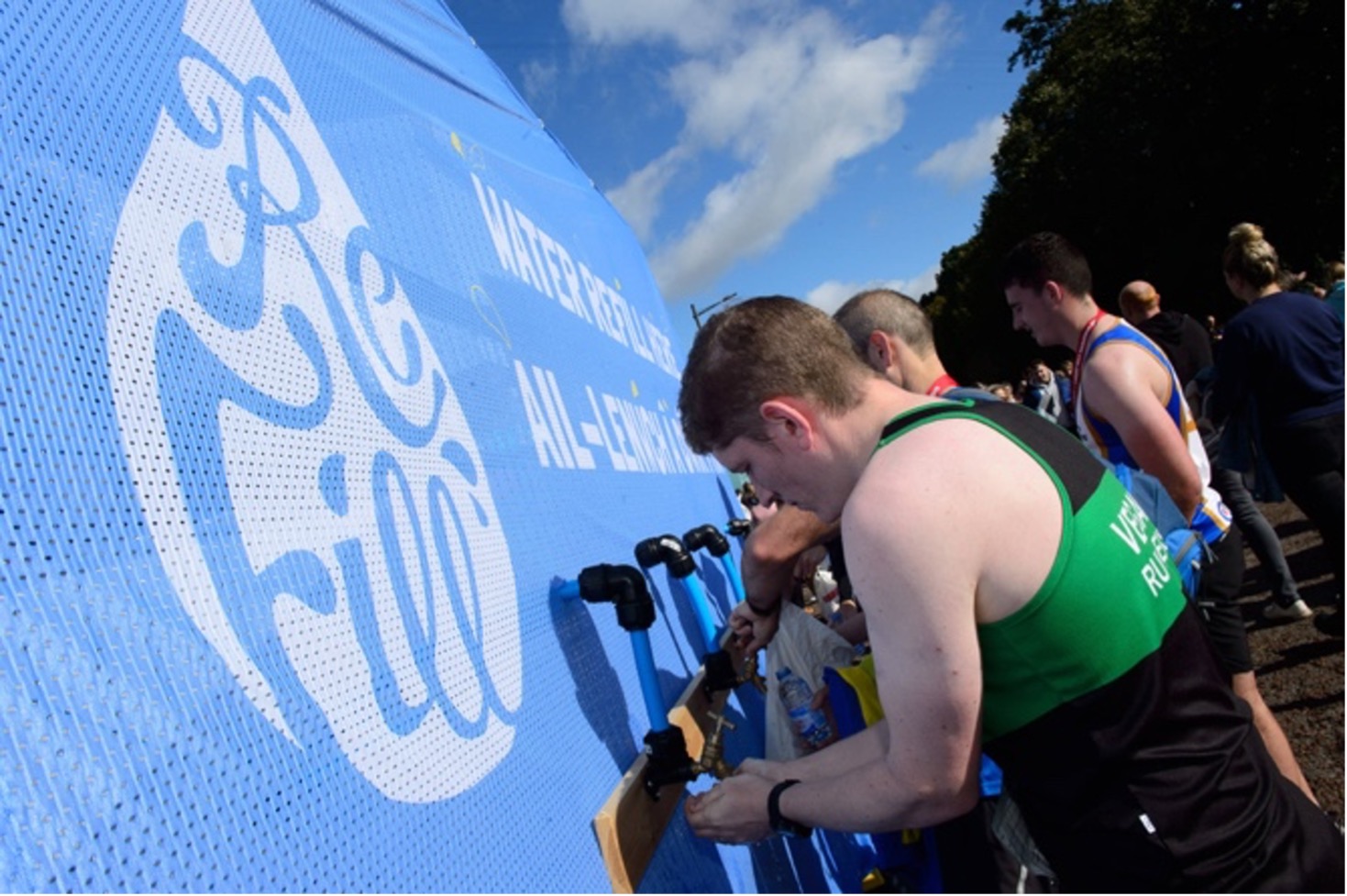 Join in on World Refill Day!

The team have celebrated two Refill Day’s by organising events in Cardiff City Centre. In 2019 they organised a pop-up event on the busiest pedestrian street in Cardiff, working closely with Cardiff Council and Dwr Cymru. They held a water bottle exchange, where passers could exchange their plastic water bottles for reusable bottles and learn more about the Refill campaign. In 2021, to celebrate World Refill Day, the team worked collaborated with a local café and Cardiff University Volunteering Society, with the Refill Cymru Manager invited to speak. The team organised a guided plastic litter pick around the Civic Centre and Bute Park. The event ended with a plastic-free picnic and dancers from the Salsa Society gave everyone a dance lesson. It was a highly entertaining, family-friendly event that had been organised with the team thinking about safety, social distancing, and hygiene at every element.

It was clear that a Refill Scheme led by a team at a university would not succeed without the support of the whole University body. Cardiff University, Cardiff University Student Union and Cardiff Union Foods have been very supportive of the Refill Cardiff campaign and have promoted the team’s activities and the campaign on social media and via their websites. They were nominated for the Vice Chancellors Sustainability Award and were also shortlisted for a ‘Cardiff Life’ Civic Award.

Expanding the Refill Campaign in Cardiff

Cardiff University have declared a Climate Emergency and have put together a sustainable strategy. You can read all about their plans here.

In 2019, the university recorded 8,000 instances of staff and students using non-disposable cups across campus. The University has also managed to reduce the number of water bottles purchased for catering and hospitality purposes by over 25% since the last academic year. This is a decline of 22,320 compared to the previous year.

All students who use university catering outlets receive a 25p discount on hot drinks if they use their own reusable cup. Plastic bags are no longer used on Open Days and water is being provided in reusable glass bottles instead of plastic. 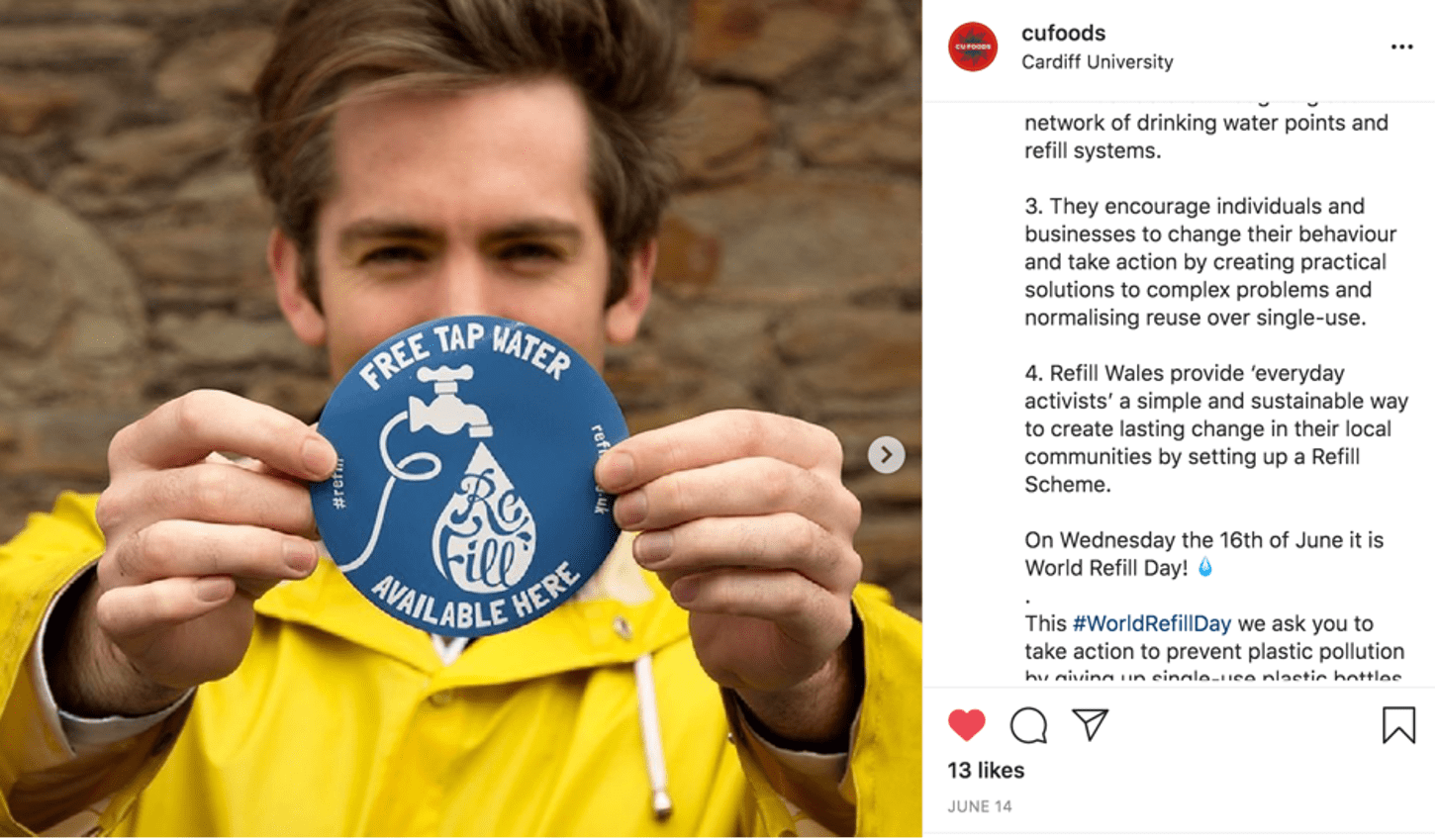 Another environmental policy being implemented by CUVC is a 50p fine for purchasing single-use plastic when representing the society, for example, when purchasing a ‘meal deal’ there would be up to an additional £1.50 to pay the club for the plastic packaging the products come in. CUVC’s hope is that the extra charge will encourage people to bring food from home and helping students save money because a meal prepared at home would be far cheaper. 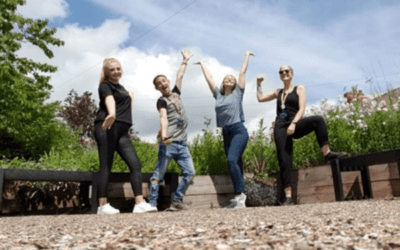 Find out how Glyndwr University are joining the Refill revolution and eliminating single-use plastic with their Green Glyndwr campaign.

END_OF_DOCUMENT_TOKEN_TO_BE_REPLACED 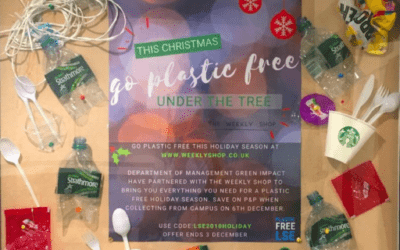 LSE Director Minouche Shafik launched Plastic Free LSE in 2018 to reduce single-use plastic on campus. The LSE Sustainability team tell us more about their approach and some of the successes of the campaign.

END_OF_DOCUMENT_TOKEN_TO_BE_REPLACED
Manage Cookie Consent
We use cookies to ensure that we give you the best experience on our website. If you continue to use this site we will assume that you are happy with it. You can view our privacy policy here.
Manage options Manage services Manage vendors Read more about these purposes
View preferences
{title} {title} {title}